They make for a yummy breakfast with a cup of coffee, milk, champurrado or atole.

My husband’s mother recently gave us her sweet tamales recipe.

I couldn’t wait to make them.

And I have to say they turned out amazingly.

I’ve never had sweet tamales before and I was pleasantly surprised.

I’ve only made savory ones like these pork tamales which are beyond delicious but a lot of work.

This wonderful woman has shared so many amazing recipes with us such as her mixiotes de pollo, ensalada de frutas and Mexican Christmas punch.

What are sweet tamales made of?

There are a variety of sweet tamales.

Some examples are strawberry, pineapple and raisin tamales.

The ones I’m sharing today are pineapple tamales with coconut and pecans.

Some people use fresh pineapple but I prefer canned as it’s so much easier.

Tamales dulces are so good and the best part is they’re pretty easy to make.

There technically is no filling in this recipe as everything gets mixed together with the masa.

What I like about these tamales are that they’re not overly sweet.

For me they have just the right amount of sweetness to them.

I use the Maseca brand for masa harina.

Make sure you get the kind specifically for tamales.

How to make tamales dulces

The very first thing you want to do is prepare the corn husks.

Remove the corn husks from their packaging and put them in a large pot.

Fill the pot with water and bring to a boil.

Remove the pot from heat and let the corn husks soak for a couple of hours.

Right before I start making the masa I remove the husks from the water and shake off excess water and let them dry a bit.

Now we can start on the masa.

Combine the masa harina, ground cinnamon and baking powder in a bowl and mix well.

Cream the butter, sugar and vanilla together with a mixer.

While continuing to mix add about 1/3 cup of the masa harina mixture to the creamed butter and sugar.

Do this slowly while mixing until you incorporated all of the masa harina to the creamed butter and sugar.

You will end up with a crumbly mixture.

Next add the evaporated milk, regular milk, sweetened condensed milk and the can of crushed pineapple.

Use a large spoon to mix everything together.

Then add the chopped pecans and shredded sweetened coconut.

Mix well with the large spoon until everything is well incorporated.

Spread about 2 heaping tablespoons of masa onto a corn husk.

You can tie the tamale with thin pieces of corn husk to keep it closed but I just flipped the tamale over.

Tying them takes to much time for us.

Put the tamales in the pot laying down.

Bring the water in the steamer to a boil them lower it to medium.

Cover and cook for one hour.

This tamales dulces (sweet tamales) recipe will make about 25-30 tamales depending on how big or small you make them.

Be very careful when taking out the tamales.

They will be very hot.

It’s best to let them cool down a bit before eating.

Sweet tamales are great during the holiday seasons.

This easy recipe is perfect for either dessert or breakfast.

Both kids and adults will enjoy them.

Give them a try!

I really hope you enjoyed today’s easy and delicious recipe!

Let me know what you think in the comments below and don’t forget to leave it a rating.

It’s a place where you can share photos and recipe of all the delicious food you make at home and get inspiration for your next cooking adventure. 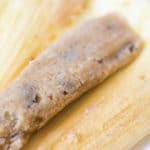 Tamales dulces are a delicious and easy treat that's perfect for dessert or even breakfast.

They really are! And they're pretty easy to make too.