Mexican buñuelos are an incredible treat that’s fried until crispy and golden then sprinkled with a cinnamon-sugar mixture.They can also be drizzled with a delicious piloncillo syrup. Buñuelos are traditionally eaten during Christmas time and New Years. They’re a favorite among both children and adults. Give them a try this holiday season. They go great with a cup of chocolate atole.

Buñuelos are not just a Mexican recipe. They are popular in other countries as well.

However each country has their own way of preparing them. Colombian buñuelos for example are ball shaped and contain cheese.

While the thought of making bunuelos may seem difficult its actually really simple. Today I’m going to show you the steps.

I remember the first time I ever tried a buñuelo. Years ago in high school I went to one of my friends house and her grandmother was there visiting from Mexico.

Her grandmother made buñuelos for us. It’s funny how I remember my first times eating certain foods. I guess that tells me how much I really love food!

Her grandma made it look so easy and she did it so fast. So when I got home I decided to make them myself but somehow they just didn’t turn out like her grandma’s.

But I’ve been practicing ever since and now I have perfected them.

What are Mexican buñuelos made of?

What I like about bunuelos is that they’re made with inexpensive basic ingredients that I always have on hand such as:

I use Mexican vanilla. I recommend it for a more authentic taste. The kind I use is called Molina.

After frying my buñuelos I sprinkle them with a cinnamon-sugar mixture. You can buy this premixed or you can make it yourself. I suggest making it yourself as it’s super easy and less expensive.

Grab a large mixing bowl and add the flour, sugar, salt and baking powder and mix well. Then make a well in the center and add the egg and butter and vanilla.

Mix everything together with your hand. It should look like the photo below.

Slowly add the water and mix for a few minutes and shape into a ball. Let it rest for about 20-30 minutes.

After letting the dough rest divide the dough into about 18 dough balls.

Sprinkle some flour over the surface where you will be rolling out the balls. Take one of the balls and flatten it with your palm. Then roll the dough out with a rolling pin.

If the dough sticks to the table or rolling pin sprinkle some more flour over it.

It should look like the photo below. Don’t worry if it isn’t a perfect circle mine obviously isn’t perfectly round.

It should also be very very thin. Roll out the rest of the dough balls and then heat up enough oil for frying in a large skillet over medium heat.

I used a cast iron skillet. I also like to line a baking sheet with paper towels to transfer the buñuelos to when they’re done frying.

Once the oil is hot fry the bunuelos one at a time on each side for about 30 seconds until they turn a golden color.

Transfer them to a paper towel lined baking sheet so the oil can drain. After frying each buñuelo I immediately sprinkle them with a cinnamon sugar mixture.

It’s important to do this after frying and while they’re still hot so the cinnamon sugar mixture will stick to the buñuelos.

If you follow all of the above steps I assure you your buñuelos will turn out perfect!

Looking for more delicious Mexican recipes to serve during the holidays? Try these:

Tips on How to Make Bunuelos

What is the difference between buñuelos and sopapillas?

Buñuelos are thin, crispy and flaky while sopapillas are softer and puffed. I have a super quick and easy way to make sopapillas using flour tortillas. They’re not real authentic sopapillas of course but they sure are yummy!

I hope you guys enjoyed this recipe for Mexican buñuelos and I hope you will give them a try this holiday season.

I just know you will love them! If you make them I’d love to know how they turned out.

Let me know your thoughts in the comments below and don’t forget to leave this recipe a rating. 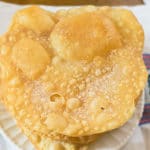 Bunuelos are a popular snack or treat in many Latin American countries and they’re so easy to make!

[…] This drink is perfect for breakfast because it really fills you up and warms you up before starting your day. Try it with your favorite Mexican breakfast such as enfrijoladas or chilaquiles. It’s also yummy during any other time of the day. It’s especially delicious with some bunuelos! […]

[…] you’re making tamales for the holidays be sure to also check out my bunuelos. They are also super […]