This ensalada de frutas (fruit salad) is perfect for breakfast, as a snack or even as a light dessert.

This version is made with yogurt, a variety or fruits and some chopped pecans for a little crunch.

I have to thank my mother in law for this yummy ensalada de frutas recipe.

She makes this ensalada Navideña for the holidays and my husband was craving it so he called her asking for the recipe.

My husband and I really enjoyed it.

It’s the best fruit salad I’ve ever had.

My husband works outside all day and he really loved eating this on his lunch break.

It’s delicious, refreshing and not too filling.

This is a simple yet very delicious recipe that you can adapt to your liking.

What does a fruit salad contain?

A fruit salad is very versatile. What a fruit salad contains will depend on who is making it.

However the list goes on and on. You can make a fruit salad with the fruits of your choice.

Just be careful as some fruits such as apples and bananas will turn brown.

So if you’re making a fruit salad containing apples or bananas you want to make sure that that you don’t make it too far in advance.

Fruit salads are sometimes served immersed in a cream or yogurt.

Or they’re sometimes served with some freshly squeezed citrus juice such as this Mexican fruit salad.

When it’s served in yogurt or cream it’s not uncommon for it to include chopped nuts, shredded coconut or even marshmallows.

As you can see I used plain yogurt for this recipe as that’s what I had in my refrigerator.

However you can always use vanilla yogurt.

If you do use vanilla yogurt you can omit the vanilla extract.

You’ll also want to either reduce or completely omit the sweetened condensed milk as vanilla yogurt is already sweet.

We really like how this recipe isn’t as sweet as other recipes tend to be.

My husband is very careful to limit his sugar consumption and he says this recipe is perfect to him.

My mother in law also puts mini marshmallows in her ensalada de frutas.

However we chose not to as we didn’t want it any sweeter.

How do you make fruit salad (ensalada de frutas)

Slice the grapes into halves and dice the apples.

Combine the yogurt, sweetened condensed milk and vanilla extract in a large bowl and mix well.

Mix well with a spoon.

You can serve the fruit salad now or cover it tightly and transfer it to the refrigerator.

What to serve with Ensalada Navideña?

Since this fruit salad is typically served during Christmas you should serve it with some foods that are commonly served for Christmas such as:

How long will this ensalada de frutas (fruit salad) last?

This fruit salad will be good for about a day and a half stored in the refrigerator of course.

After that the apples will begin to brown. Though this fruit salad is so good I don’t think it will even last that long in your fridge.

Variations on this Ensalada Navideña

This ensalada is very versatile instead of yogurt it can be made with sour cream, Mexican crema, evaporated milk or whipping cream.

Some people even add cream cheese to this salad

So basically the dressing can be made with whatever you happen to have in your fridge.

Definitely feel free to adjust the amount of sweetened condensed milk in this salad.

We like it less sweet but if you want to add more that is fine.

Just add a little at a time until you get the right amount of sweetness you’re looking for.

Get creative and make it yours! That’s what makes cooking fun.

I hope you enjoy this easy and delicious fruit salad recipe.

Not only is it an amazing Christmas fruit salad but it’s also a refreshing snack during the hot summer months.

If you try it let me know what you think of it in the comments below.

Also don’t forget to leave it a rating. 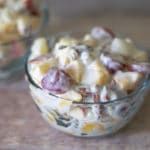 Ensalada de frutas (fruit salad) is perfect for breakfast, lunch, as a snack or even as dessert.