This Mexican pasta salad with ham or ensalada de coditos con jamón in Spanish is a delicious and easy pasta salad that’s perfect for lunch! It’s something the whole family will enjoy. It’s a great side dish for carne asada (grilled meat) during the summer months.

This is a great recipe to use up leftover ham and veggies. We buy a lot of ham as my husband loves making tortas de jamón (Mexican ham sandwiches).

When he gets tired of his ham sandwiches I like to make other meals with the ham such as the recipe I’m sharing today as well as Mexican white spaghetti and scrambled eggs with ham.

Since this recipe is known as ensalada de coditos its traditional to use elbow macaroni as “coditos” translates to “elbows” in English. However other pastas such as shell pasta will work just as well.

Use the ham of your choice here. I use whatever ham I have on hand. Sometimes that is thin sliced deli ham and sometimes it’s the thicker kind that I like to cut into cubes.

Use the cheese of your choice. Some good options include cheddar, colby jack or cheddar jack.

Pickled jalapeños will add some heat as well as a touch of tang do the dish. Don’t worry the jalapeños don’t make it very spicy.

These both add creaminess. The sour cream will add a little tanginess.

This will prevent the pasta from sticking together.

First we want to cook the macaroni.

Cooking the macaroni first will allow it enough time to cool down completely while we prep the other ingredients.

Once the macaroni is done and rinsed with cold water pour a little olive oil over it and stir. This will prevent the macaroni from sticking to each other.

I bought my cheese already in cubes but I cut them into even smaller cubes as I don’t like big chunks of cheese in my macaroni salad.

Grate the carrot, finely chop the onion and celery.

Chop the pickled jalapeños and chop the ham into small cubes.

In a large bowl mix together the mayonnaise, sour cream, black pepper and garlic salt.

Then add the carrot, onion, celery and cheese to the mixture and mix.

Then add the pickled jalapeños and ham and mix again.

Next add the macaroni and mix well. Then cover and put it in the refrigerator to chill.

This ensalada de coditos tastes best once it has chilled in the refrigerator for a couple of hours.

Serve it with crackers, tostadas or all on its own. It’s delicious however you choose to serve it!

Macaroni salad is a great lunch option during the summer months when it’s hot and you’d rather eat something cold.

How long does it last in the fridge?

Mexican ham pasta salad will stay good for up to three days in the fridge if properly stored in an airtight container.

This Mexican pasta salad with ham is always a hit with friends and family! Make sure to give it a try.

Let me know what you think of it in the comments below. And don’t forget to leave it a rating! 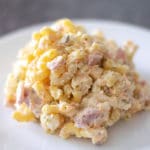 Ensalada de coditos (Macaroni Salad) is a great lunch option during the hot summer weather. It's delicious and easy to make.