It’s the prefect beverage for when you’re feeling under the weather.

It’s warm and cinnamony and does a great job at soothing a sore throat!

This recipe and pretty much every other recipe I write uses ceylon cinnamon sticks.

You may have heard it called “true cinnamon”.

The other type of cinnamon is called cassia and its what most supermarkets sell.

In order to get ceylon cinnamon you should visit a Mexican supermarket or order it online.

If you live in a diverse city you may be able to find it in your local grocery store.

I just made this tea this morning for my 7 year old son.

He has strep throat and I knew this would make him feel better.

It always works for me.

My ex husband introduced me to cinnamon tea years ago when I was sick with a sore throat.

Now it’s something I always prepare when the kids or I have sore throats.

It really hits the spot.

But you can enjoy this great tasting tea anytime not just when you’re sick.

Is Drinking Cinnamon Tea Good For You?

Yes drinking cinnamon tea is very good for you.

Ceylon cinnamon helps lower blood sugar and it is loaded with antioxidants.

It can also help with blood pressure.

You can find these cinnamon sticks at any Mexican grocery store.

I always find them at Save a Lot.

Recipes That Use Cinnamon Sticks

It’s important that you don’t use ground cinnamon to make this.

It won’t turn out the same.

You can however substitute the lime for lemon if you prefer.

Don’t forget to break up the cinnamon stick into pieces before steeping.

If you leave the stick whole you won’t get as much flavor out of it.

I steep mine for about 15 minutes and that’s strong enough for me.

If you like a stronger cinnamon taste you can steep it a little bit longer.

We’ve been on a kick lately with teas and other hot beverages but when it’s cold that’s all we feel like drinking.

If you like this tea you may also like cinnamon milk tea and orange cinnamon spice tea.

This tea is incredibly easy to make.

You must try it!

It’s especially good during the winter months and when you’re feeling sick. 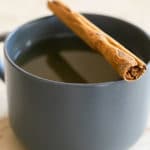 Té de canela (cinnamon tea) is great for when you have a sore throat or cough.

This is really good and help me a lot

I'm glad you enjoyed it!

If you steep for 15 mins how's it going to remain hot? You'll end up with a cold cup of water on a chilly winter morning!

How many times can I use the same cinnamon stick to make tea?

I've always used a new stick to make tea. I never reuse the same one.