Atole de avena is a comforting Mexican oatmeal recipe that’s perfect on a chilly morning. It really hits the spot during the winter months. If you like this recipe you should try my toasted oatmeal next.

If you like oatmeal then you are definitely going to love this oatmeal atole.

It’s basically a drinkable version of oatmeal but with a Mexican twist.

It’s so yummy and it’s something that the whole family will enjoy.

Atole de avena is different from other atoles because it’s made with oats instead of masa harina.

If you’d like to try some beverages made with masa harina check out my atole de fresa, atole de vainilla and champurrado recipes.

They are so good in the fall and winter.

I’ve recently been making this avena recipe about three times a week because my kids are constantly asking for it.

It’s such a delicious way to prepare oatmeal.

My recipe makes a lot so I save what’s leftover for breakfast the next day.

This oatmeal recipe calls for just 6 ingredients. You probably already have most of them.

If you can’t find some of these ingredients at your local grocery store try going to a Mexican supermarket.

There you’ll find everything you need. For this recipe you’ll need:

How to make this authentic Mexican oatmeal.

The first thing we’re going to do is bring the cinnamon stick and water to a boil in a large pot.

Once the water is boiling then we can add the oats.

Then reduce the heat to low and cover.

Let it simmer for about 25 minutes.

While its simmering stir a couple of times to prevent sticking.

After the 25 minutes the oats will have absorbed most of the water.

Now we are going to stir in the brown sugar.

Then add the milk and stir.

Now continue to simmer the atole on low heat until it is nice and hot.

It should take about 15 minutes.

The atole is now ready to be served.

Feel free to add a sprinkle of cinnamon when serving the avena.

I serve it in mugs and I like to use a spoon too so that I can eat the leftover oats at the bottom of my mug.

How can I make this oatmeal more creamy?

I prefer a thinner consistency however if you would like a more creamy oatmeal I suggest you substitute one cup of the milk with evaporated milk.

Also instead of brown sugar use a can of sweetened condensed milk.

Can I reheat this atole?

Of course. Just put it in a microwave safe bowl or mug and heat it up until warm.

This delicious avena is filling and so easy to make. So go ahead and give it a try.

You won’t regret it.

I truly hope you enjoy this homemade oatmeal as much as we do.

It’ll be your best friend during the chilly fall and winter weather.

If you liked this recipe please give it a rating below and let me know what you think of it in the comments section. 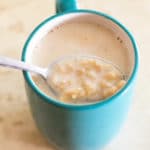 Your recipes are the best and never disappoint. This is a keeper. Thank you. The only thing I substitute is the brown sugar. I use Truvia brown sugar blend and it is perfect.

Thank you, that means a lot! I'm glad you enjoy the recipes.

It is the best

Can you use Almond milk instead of milk?

I've never tried it with almond milk before so I don't know how it would turn out. If you try it please let me know how it turns out.

[…] mom made some atole de avena today, which is basically a “drinkable version of oatmeal.” She tends to make it a lot towards the winter and spring months since it warms us up when its super […]