Toasted cinnamon spice oatmeal will become your new favorite breakfast. It’s delicious, easy and flavorful. It’s really a great way to spice up your basic oatmeal. If you like this recipe try my atole de avena next!

This is my go to oatmeal recipe.

I have it everyday sometimes twice a day.

It’s so simple yet so much better than your basic boring oatmeal.

It even makes for a great late night snack.

I have eaten it many times at night with a little brown sugar. Hmmm it’s absolutely amazing.

Why should I toast my oats?

Toasting the oats gives the oatmeal an amazing flavor and texture.

Instead of your usual mushy and tasteless oatmeal toasting the oats will result in a chewy oatmeal with a slightly nutty flavor.

For the ground spices I use ground cinnamon and ground nutmeg.

First melt the butter in a pot over medium low heat.

Once the butter has melted add the whole cloves and toast for a couple of minutes or until you start to smell the aroma of the cloves.

This is optional but if you have a small piece of a cinnamon stick you can add that along with the whole cloves.

Then add the oats and continue toasting for 5-7 minutes. Make sure to stir frequently so the oats don’t burn.

Next add the ground spices and the water. Bring to a boil then lower heat back to medium low and simmer for 3-5 minutes or until most of the water has evaporated.

If you want a very chewy oatmeal add just 2 cups of water. If you want it less chewy add 3 cups.

Then stir in the vanilla and remove from heat.

Make sure to remove the whole spices before serving.

As you can see the final result is a non mushy oatmeal with the individual oats keeping their shape.

Can I toast quick oats?

I’ve tried toasting quick oats for making oatmeal and I don’t recommend it.

The quick oats don’t keep their shape and end up breaking into even smaller pieces resulting in a mushy oatmeal.

Stick to the old fashioned oats for this recipe.

You can sweeten it with honey, brown sugar which is my favorite or your choice of sweetener.

Add your favorite toppings such as shredded coconut, chopped nuts or fresh fruit.

You can use your favorite type of milk whether it’s coconut milk, almond milk or regular milk.

I hope you’ve enjoyed today’s recipe, let me know what you think of it in the comments below. 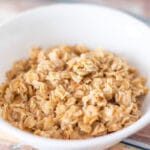 This toasted cinnamon spice oatmeal is a delicious and easy way to spice up your breakfast routine.