This cinnamon milk tea is just what you need on a chilly day or any kind of day for that matter. It’s warm, sweet, cinnamony and super easy to make! It’s great anytime you’re in the mood for tea. If you enjoy this recipe you’ll have to try my orange cinnamon spice tea next!

I don’t know about you but I’m definitely a tea kind of woman. It’s very rare that I drink coffee. I don’t like how coffee gives me that jittery feeling. Which is too bad cause I really like drinking coffee especially iced coffee.

Fortunately, I never get that feeling with any type of tea even if it does have caffeine in it which is good cause I usually drink two cups a day.

My favorite kind of tea is cinnamon tea. It’s made with Mexican cinnamon sticks. They look like this and you can find them in any Mexican market. This kind of cinnamon is not hard. It’s very easy to break into pieces which is exactly what we’re doing in this recipe.

This recipe is very similar to my other cinnamon tea recipe. The only differences are this one doesn’t include lime and this one has the addition of milk.

It’s super easy to make this tea. Just add water to a pot and bring it to a boil. Break up a cinnamon stick into pieces and place in the boiling water. Now, let the cinnamon steep for about 15 minutes.

Then strain the tea into mugs. This recipe will make enough tea for four mugs.

Then add honey and milk and stir.

That’s all there is to it. And it’s sooo good. Cinnamon milk tea is something I enjoy drinking in the evening curled up on the couch. It’s very comforting. I hope you’ll give it a try!

Don’t forget to leave this recipe a rating. Thank you for visiting! 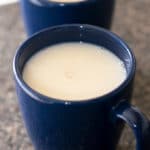 cinnamon milk tea is a delicious and comforting beverage that's perfect any time of day.

[…] For a simpler but just as delicious beverage you’ll have to try my cinnamon milk tea. […]

[…] Of course! You can use either the canned variety or the kind that comes in a carton. If you want a creamier more coconutty flavored smoothie definitely use canned coconut milk. If you prefer a lighter coconut flavor use the carton variety. I like this smoothie both ways however I usually use the coconut milk in the carton because I always have multiple cartons of coconut milk in my fridge as we enjoy it many things such as oatmeal, chia pudding, banana smoothies, and this cinnamon milk tea. […]

[…] Today you’ll learn how to make cinnamon tea known as té de canela in Mexico. It’s the prefect beverage for when you’re feeling under the weather. It’s warm and cinnamony and does a great job at soothing a sore throat! I also love this cinnamon milk tea. […]