Save your orange peels and make this incredibly delicious orange cinnamon spice tea.

It’s the perfect tea for the fall and winter weather.

For a simpler but just as delicious beverage you’ll have to try my cinnamon milk tea.

I am a big tea drinker. I love it and could drink it every day.

I’m not so big on coffee unless it’s this Mexican iced coffee.

What is orange cinnamon spice tea made with?

As you can see this tea is made with common ingredients that you most likely already have in your kitchen.

What kind of cinnamon stick do I use for cinnamon orange tea?

You will need to use a ceylon cinnamon stick.

You can find it at Mexican grocery stores.

You will find it labeled as “canela” which is the spanish word for cinnamon.

Put the water, orange peel, cinnamon stick and whole cloves in a pot.

Bring the water to a boil over medium high heat.

Then reduce to medium low and simmer for 7 minutes.

Next remove the pot from heat and add the tea bags.

Let them steep for 5 minutes.

Next add the vanilla extract and stir.

The tea will be very hot so let it cool just a bit before serving.

Pour into a mug and sweeten with honey to taste.

I also like to top mine off with a little milk but that is optional.

I hope you enjoyed today’s yummy and soothing tea recipe.

Now that we’re heading into the Fall season it’s the perfect time to enjoy it.

For another yummy tea recipe check out my mango bubble tea. 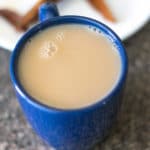 This orange cinnamon spice tea recipe is the perfect beverage for the Fall season.