Have you ever wondered how to make hard taco shells? Well I’m happy to tell you it’s a whole lot easier than you probably think. In fact you can whip them up in just minutes! They’re perfect for shrimp tacos.

I’ve always been a hard shell taco kind of gal.

I’ve just never been into the soft shell.

Even though I feel like most people prefer the soft shell.

Whenever my mom, sister and I would go get tacos they would always order soft shell and I’d be the only ordering a hard shell.

I just prefer the corn flavor and the crunchy texture of the hard shell.

The soft shell can be a little boring if you ask me.

But to each their own.

What do you prefer?

I recently filled these hard taco shells with some spicy potatoes.

They were so good!

It’s not always necessary to fill taco shells with meat.

The crunch of the taco shell really complimented the softness of the potatoes.

In a skillet heat up about a cup of oil over medium heat.

I used corn oil but vegetable oil would also work.

Once the oil is hot and sizzling place a corn tortilla in the oil.

Let it fry for a couple of seconds.

Then using a pair of tongs gently fold the tortilla over.

Continue frying for about 25 seconds.

Keep the tortilla slightly open while it’s frying by holding the top part with the tongs as shown below.

Then flip the tortilla over and fry the other side for another 25 seconds.

Then transfer to a paper towel lined plate to drain the excess oil.

You can make as many as you want. Just add more oil as needed.

Hard taco shells are a nice change from the usual soft shells.

They have crunch and texture and can be filled with delicious things such as picadillo and carnitas!

Don’t forget to join the Latin American Foodies Facebook group
where you can share photos and recipes of the delicious food you make at home! 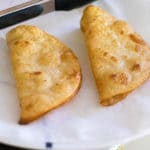 How to make Hard Taco Shells

Hard taco shells are very easy to make. They can be made in less than 10 minutes.

[…] The first thing is to make the actual taco shells. This is super easy and you can find the instructions here. […]