These delicious dutch oven carnitas make for the best tacos ever PERIOD. At least according to my family that is. But seriously, my kids adore it, and I enjoy making it for them even more. Onion, garlic, Mexican spices and seasonings, and a not-so-secret meat tenderizer combine to create juicy, tangy shredded pork with rich, authentic flavor. The prep is quick, and then you leave it on the stove to slow cook for a few hours before returning to the juiciest, most delicious pork carnitas! If you enjoy this recipe you’ll have to check out my barbacoa recipe next!

What are pork carnitas?

Pork carnitas may be a distant but much older cousin of pulled pork. Carnitas, which translates to “small meats,” first appeared in the Mexican southwest state of Michoacan.

However, different regions in the country will have their own take on carnitas.

Carnitas is traditionally made by slow-cooking pork in lard and truly, in our opinion, few things can beat this taste.

Only a few ingredients are required to make pork carnitas. They are:

Pork butt is actually meat from the pig’s shoulders. I like to trim some of the excess fat then I cut the meat into chunks for faster cooking.

Now, you would assume that something this delicious would require a secret ingredient. That’s not entirely wrong. A 12 0z. bottle of coca-cola is used to add incredible caramel-like complexity to our carnitas while helping it become tender and more flavorful.

Many Mexican taquerias tenderize and flavor their meats with Coca-cola. Pork Carnitas is usually marinated in a mixture of Coca-Cola, orange juice, lime juice, vinegar, and spices overnight.

Cola’s high acidity and caramel flavor make it an extremely effective meat tenderizer. Coca-cola, with a pH of about 2.7, is acidic enough to break down some proteins without dissolving your pork carnitas.

Coca-Cola has long been a staple in cooking, particularly in marinades and sauces for meats. This sugary beverage isn’t good for you if you drink it every day, but it’s great to use in pork carnitas. Its pleasant acidity, which can help tenderize meat, makes it an ideal addition to a long, slow brine.

Put the pork chunks in a large bowl and season with salt.

Next heat up 1 tbs of olive oil in a dutch oven over medium heat. Once hot add some of the pork chunks and sear on all sides for a few minutes or until they’re nice and browned.

You’ll have to do this in batches so as to not crowd the pan. Once browned remove the pork chunks and repeat with the next batch.

Then add a little more olive oil to the dutch oven and add the sliced onion.

Season with salt and let it cook for a few minutes. Then add the garlic cloves and continue to cook for another 1-2 minutes.

Now return the pork chunks back to the dutch oven along with the bay leaf, dried oregano, black pepper, Coca Cola and water.

Bring to a boil then reduce the heat to medium low. Cover and cook for two hours.

After the carnitas have been cooking for two hours, remove the lid.

Continue to cook for another 20 minutes or until all of the liquid has evaporated.

The pork chunks should be fork-tender at this point.

Salt to taste. You can leave the carnitas in chunks or you can shred them using a fork.

If making tacos you need to shred at least some of the meat.

The inside of the carnitas will juicy and tender and some of the outside will have crispy bits.

How to make carnitas tacos

This traditional Mexican “street taco” is simple to make at home. It’s even better because you can customize the toppings to suit everyone’s tastes.

We’ll need corn tortillas. Tortillas are a long-standing staple in Mexican cuisine. There are two types – corn and flour.

Corn tortillas are less sturdy and have a different appearance than flour tortillas.

The smaller, yellowish corn tortillas are more likely to fall apart. So, in order to remain strong enough to support a variety of traditional fillings, they must remain compact. Some taquerias will also double up to protect the contents.

For our simple yet authentic carnitas tacos, we’ll be using corn tortillas. These street style taco tortillas are the best size for handheld tacos. You can save flour tortillas for other things like burritos.

To make the carnitas tacos just warm up some corn tortillas in the microwave until pliable.

Then spoon some of the meat onto the center of the tortillas and fold.

Top with your favorite toppings. The most traditional are chopped cilantro and diced onion.

Oh and you can’t forget fresh cut limes for squeezing over the tacos.

These dutch oven carnitas are the easiest and most delicious ever! You’ve got to give them a try!

They’re great with a simple side of beans and rice.

I hope you enjoyed today’s recipe and I hope you’ll give it a try.

I’d love to hear what you think of this recipe in the comments below and don’t forget to leave it a rating! 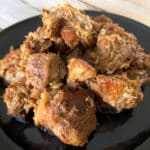 Dutch oven carnitas are an easy and delicious Mexican recipe the whole family will enjoy.20

How to Make Hard Taco Shells - Thrift and Spice

[…] Hard taco shells are a nice change from the usual soft shells. They have crunch and texture and can be filled with delicious things such as picadillo and carnitas! […]