Espagueti verde or “green spaghetti” is a delicious Mexican recipe consisting of spaghetti noodles in a flavorful and creamy green pasta sauce. Espagueti rojo and espagueti blanco are some other Mexican takes on spaghetti that’s also super delicious and even easier to make.

Espagueti verde is one of my husbands favorite meals that I make for him.

It is a popular dish commonly served at celebrations and gatherings.

What is green spaghetti made of?

You may be wondering how exactly the spaghetti gets it green color.

Poblano peppers are what gives the sauce it’s green color.

They are also the same peppers used when making chiles rellenos.

The concept of a green sauce for pasta may seem strange at first but you gotta give it a try.

The flavor is absolutely amazing.

No, this dish is not spicy.

Poblano peppers can vary in their level of heat.

They’re usually pretty mild but sometimes you might get one that’s a little spicy.

If you do happen to get a pepper that is spicy the ingredients in the sauce will mellow it out so that it isn’t too spicy.

This dish is made from simple ingredients such as:

How to make green spaghetti

The first step is to roast the poblano peppers.

Place them on a baking sheet lined with foil.

Then put them under the broiler for ten minutes.

They will look like this after the ten minutes.

Flip the peppers over and put them back under the broiler for another ten minutes so the other side can blacken.

Place the peppers in a plastic bag to sweat for about 20 minutes.

Once they have cooled down you can start peeling the skin off them.

Cut the stems off and throw them away you won’t need them.

Then scoop out the seeds.

Cut the peppers into strips as if you were making rajas con crema.

Put the pepper strips into a blender along with two peeled garlic cloves, 1/4 of a white onion, 1/2 bunch of chopped cilantro, 2 tsp of chicken bouillon, 1/2 tsp of ground black pepper, 8 oz cream cheese (softened) and 1 cup of milk.

Before putting the cream cheese in the blender I diced it into smaller squares to make it easier to blend.

Blend for a couple of minutes until you get a smooth sauce.

Set the salsa aside while you cook the spaghetti.

Bring water to a boil.

Then add the spaghetti and cook according to the instructions on the box.

I prefer my spaghetti al dente but its all up to you.

While the spaghetti is cooking heat up 2 tbs of butter in a separate pot over medium heat.

Once the butter is melted and sizzling add the green sauce.

Let the salsa warm up.

Once the spaghetti is done drain it and add it to the pot with the sauce.

Use tongs to help the spaghetti get completely coated in the sauce.

The spaghetti is now done and ready to be served.

Looking for more delicious recipes? Give these a try:

What to serve with green spaghetti

Espagueti verde is a delicious and easy recipe that can be served on its own or as a side.

It’s really good as a side to carne asada and baked chicken.

I really hope you enjoyed this recipe for Mexican green spaghetti (espagueti verde).

It really is a delicious way to prepare spaghetti. I hope you will give it a try. It’s something the whole family will love.

I’d love to hear your thoughts on this recipe in the comments below and don’t forget to leave it a rating. 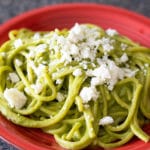 This was tonight’s dinner Was amazing! Can’t wait to make this again!

[…] super easy and quick to make! Next you’ll have to try green spaghetti (espagueti […]

Is this good for a potluck?