Sesame seed milk also known as “leche de ajonjolí” in Spanish is a delicious way to make horchata using sesame seeds. This version of horchata is popular throughout Puerto Rico and El Salvador. This drink can be made with or without dairy and can be sweetened according to your liking. If you enjoy this sesame seed drink, you’ll have to try my coconut horchata next!

I’ve been totally obsessed with this sesame drink the past couple of weeks. It really is amazing!

Sesame seeds are the star of the show in this recipe and not just a garnish or topping like they are in salsa macha or this egg and rice recipe.

If you like sesame seeds I urge you to give this drink a try.

It’s a lot like rice horchata but with a more nutty and creamy flavor.

What is sesame milk?

Sesame milk is a beverage made from sesame seeds and water in it’s most basic form.

However, this leche de ajonjolí recipe can easily be adjusted.

So I highly recommend you adjust it as needed to suit your needs and tastes.

Yes, not only are sesame seeds tasty, they are also very healthy for you and have lots of nutritional benefits.

If you’re looking to get the most health benefits from this drink it’s best to reduce or omit the sweetened condensed milk in this recipe.

Sesame seed milk has a nutty, creamy but light taste.

It’s a unique and delicious taste that doesn’t overwhelm.

First measure out the amount of sesame seeds you’ll need. As you can see, we are using white sesame seeds.

Heat up a large pan over medium heat. Add the sesame seeds and toast the seeds for about 5 minutes while stirring almost constantly.

Toasting the seeds is optional but I recommend it as it’s what brings out a more nutty taste to the end result.

It’s very easy to burn sesame seeds so don’t leave them unattended. If they burn they will impart a very bitter taste to the drink which won’t taste good.

It’s okay if they’re not all evenly toasted.

Once the seeds are done toasting immediately transfer them to a bowl. Break a cinnamon stick into pieces and add it to the seeds along with water.

Cover the bowl and let the seeds soak for about 3 hours.

This next step you’ll probably have to do in two batches.

After the seeds have soaked, transfer them, the cinnamon and the water to a blender and blend with more water until smooth.

Strain the blended sesame mixture into a pitcher using a fine mesh strainer.

Use the back of a large spoon to press the liquid through the strainer.

You want to make sure you press as much of the liquid through as possible as this is where the flavor is.

Discard what’s leftover in the strainer.

Next, stir in the sweetened condensed milk, vanilla extract and some additional water.

That’s all there is to it. Making horchata de ajonjolí (sesame horchata) is super simple.

Can I use already toasted sesame seeds?

Yes, you can buy your seeds already toasted if that’s what you prefer. However, I have tried it myself and I found the taste too bitter for my liking. I prefer to toast the seeds myself.

Remember, you don’t have to toast the seeds. You can just go straight to soaking the seeds. It still comes out delicious.

Where can I find sesame seeds?

I get my seeds from an Indian grocery store. They have lots of spices and in bulk.

Since you’ll need two cups of seeds for this recipe it’ll be better and cheaper to buy them in a large quantity.

If you don’t have an Indian or Asian grocery store nearby you may have to order them online.

How can I use sesame milk?

My favorite way to use sesame milk is by serving it over ice cubes.

Leche de ajonjolí is super delicious and refreshing all on its own.

How long does homemade sesame milk last in the refrigerator?

This homemade milk will last for about 3 days stored in the refrigerator.

Sesame seed milk or leche de ajonjolí is a yummy and refreshing beverage perfect for the summer time. It’s unique, delicious and will certainly impress your friends and family!

I hope you give this recipe a try and I hope you enjoy it as much as we do.

Let me know your thoughts on this sesame drink in the comments below and don’t forget to leave it a rating. 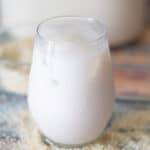