Atole de Maizena is a delicious and filling drink that is perfect for cold winter mornings or really anytime at all! It’s super easy and quick to make.

Atole can also be made with Maseca which is an instant corn masa flour.

In fact here is a recipe for atole de vainilla using Maseca.

However, today’s recipe for atole de Maizena is an even faster and convenient way to make atole.

Since this drink is made with corn starch the texture is different from the atole made with masa harina.

It has a silkier and smoother texture.

Both ways of making atole are absolutely delicious.

Maizena is the name of the brand of the flavored cornstarch that we will be using today.

Maizena comes in many different flavors. Vanilla and strawberry are just a couple of them.

What you will need

All you need are the packet of Maizena, milk and sugar. I like to use a cinnamon stick and Mexican vanilla as well but that is completely optional.

How to make atole de Maizena

Slowly pour the corn starch mix into a cup of cold milk while stirring. Set aside.

Add more milk and a cinnamon stick to a pot and heat over medium high heat. Stir the milk continuously to prevent it from burning.

Once the milk comes to a boil slowly pour in the cup of corn starch and milk mixture while stirring continuously.

Continue to boil and stir constantly for 2 minutes. Then remove from heat and stir in the sugar and Mexican vanilla.

Now you should have a silky smooth and lump free atole.

The atole will be very hot. It’s best to let it cool a little bit before serving.

I like to leave the cinnamon stick in the atole while I let it cool so it can release even more of its flavor.

Enjoy this delicious drink with some Mexican sweet bread.

Atole de maizena is something that both kids and adults will enjoy. Give it a try!

It’s a place where you can share photos and recipes of all the delicious food you make at home.

And get inspiration for your next cooking adventure!

Thanks so much for visiting, see you soon! 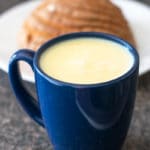 Atole de Maizena is a delicious drink made from corn starch.