This smooth, creamy, refreshing and delicious horchata de coco is just what you need to cool off this summer! It’s just as yummy as regular horchata but with an irresistable coconut flavor. If you’re into everything coconut then this is a must try! You’ll have to try my piña colada agua fresca next!

I love that it’s finally warming up outside cause that means it’s the perfect time to enjoy aguas frescas. Aguas frescas translates to “fresh waters” in english.

Aguas frescas can be made from fruits, seeds, grains and even cereals.

How to make coconut horchata

Put the rice and cinnamon stick in a bowl. I like to break the cinnamon stick into pieces. Then add some water and cover the bowl with a lid. Then place it in the refrigerator where it will soak overnight.

If you don’t have enough time to soak the rice overnight try for a minimum of four hours.

Pour the sweetened flaked coconut into a blender. Also transfer the soaked rice and cinnamon to the blender along with the soaking water. Blend for about two minutes. Then strain into a pitcher. Use a spoon to push the liquid through the strainer and really press down to make sure you get out as much liquid as possible. Then discard what’s left in the strainer.

Then pour the sugar, coconut milk, evaporated milk and sweetened condensed milk into the blender. Blend for one minute and then strain it into the pitcher.

Add more water and the vanilla to the pitcher and stir. Put it in the refrigerator to chill. Serve it over lots of ice.

How much does this recipe make?

Both kids and adults will love this drink! It’s so refreshing on a hot summer day. It’s so easy to make so make sure to give it a try this summer.

Thank you so much for visiting. Don’t forget to rate this recipe and let me know what you think in the comments below. See you soon! 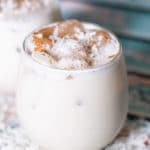 […] you love coconut you’ll have to try coconut horchata […]

[…] perfect for a meatless Monday! Serve them with a yummy and refreshing agua fresca such as coconut horchata or a creamy strawberry agua […]