This green chicken pozole recipe is not only incredibly delicious it’s also pretty easy to make. It’s also called “pozole verde” which translates to “green pozole” in English. Chicken pozole verde is a yummy and authentic Mexican dish that is sure to impress your friends and family!

What is chicken pozole verde made of?

The green chicken pozole recipe I’m sharing today is made with chicken.

However it can also be made with pork which is quite delicious as well.

What you’ll need to make this recipe are the following:

What is the difference between red and green pozole?

Red pozole or”pozole rojo” is made with dried chiles which is what gives the broth a red color.

Green pozole gets its color from the green sauce or “salsa verde” which is made with tomatillos, peppers and cilantro.

Either one can be made with either pork or chicken.

Put the chicken, 1/2 a white onion, 1 head of garlic (with the top cut off), 2 bay leaves, 2 tsp chicken bouillon and a few cracks of black pepper in a pot then fill it with about 3 quarts of water.

Bring it to a boil then reduce heat to low and cover. let it cook for 1 hour.

While the chicken is cooking it’s time to get started on the sauce ingredients. Roast the poblano pepper in the oven. You can read more on how to do that in this recipe for chiles rellenos de carne molida.

After roasting the pepper transfer it to a plastic bag to sweat for about 20 minutes.

Remove the papery husks from the tomatillos. Then rinse the tomatillos really well under running water to get rid of the sticky residue left behind.

Put the tomatillos and jalapeño in a pot and cover with water. Then bring to a boil over medium high heat.

Then cover and reduce heat to medium. Let them cook for about 5-7 minutes.

Then transfer the tomatillos and jalapeño to a blender. Also add the poblano pepper, 1/4 of a white onion, 3 garlic cloves, 2 tsp of chicken bouillon, 1 tsp of oregano, 1 tsp of ground cumin and 1 bunch of chopped cilantro.

Blend for about a minute or until you get a smooth sauce.

Heat up 1 tbs of vegetable oil in another pot over medium heat. Then add the blended green sauce and let it cook for about 5 minutes.

After the chicken has cooked for an hour remove it from the pot and transfer it to a bowl to cool.

Strain the broth and return it to the pot. Then drain the canned hominy and rinse it then add it to the pot of chicken broth.

Next, add the green sauce to the pot with the hominy. Cook on medium heat for 20 minutes.

Once the chicken has cooled remove the skins and discard. Then shred the meat. Discard the bones.

Add the shredded chicken to the pot and stir. Check for salt and add more if desired.

What to serve with green chicken pozole?

All chicken pozole verde really needs are tostadas and lots of garnishes. We like to serve it with diced onion, shredded cabbage and sliced radishes.

The delicious toppings are essential in my opinion as they add a nice crunch and flavor to the traditional Mexican soup.

You don’t want to forget the limes!

How can I make this recipe even easier?

If you’re looking to save time you can always use store-bought chicken broth and a rotisserie chicken. Though you’ll still have to shred the chicken yourself.

This can help you save time for those days when you’re super busy plus rotisserie chicken has so much flavor!

You can also buy jarred green sauce (salsa verde) instead of making it yourself.

By the way if you like salsa verde check out my recipe for beef ribs in salsa verde.

Chicken pozole verde is an amazing soup no matter the time of year but it’s especially delicious during the chilly fall and winter season.

It’s warm, comforting and filling! I truly hope you guys will enjoy this recipe as much as we do.

If you give it a try please let me know what you think of it in the comments below and don’t forget to leave it a rating. Thank you so much for visiting, see you soon! 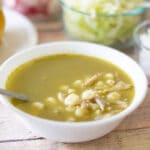